Its main goal is the research and promotion of RES/RUE/ES applications at a national and international level, as well as the support of related activities, taking into consideration the principles of sustainable development. 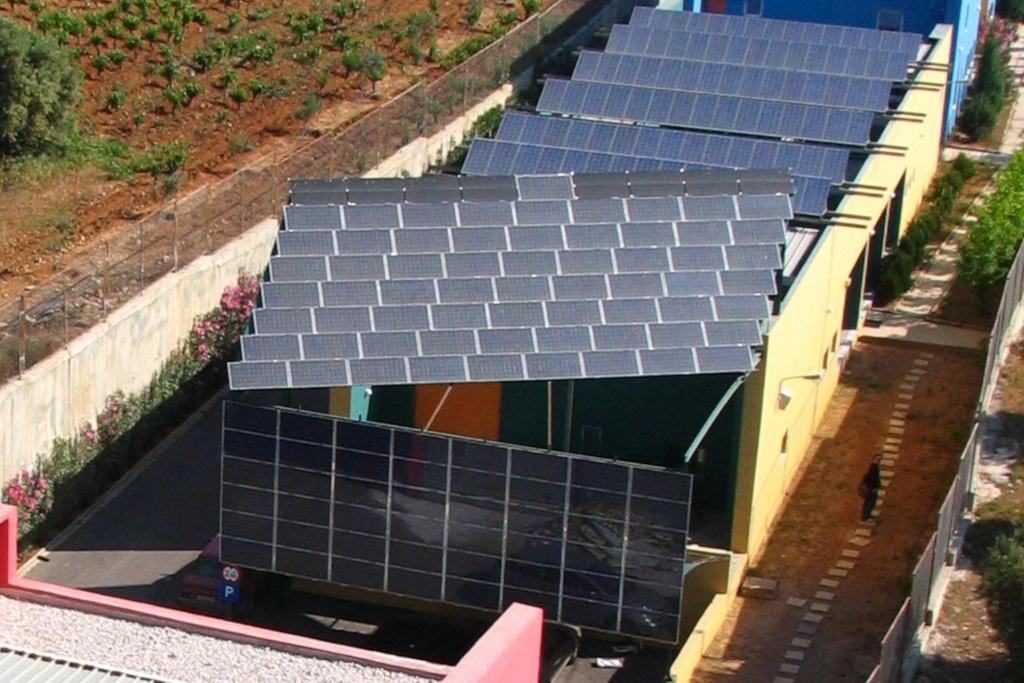 The PVs and Distributed Generation Department of CRES is involved in applied research, mainly regarding power/energy balance issues at distribution system level. In the frame of the department’s research activities, there has been developed the PV and Distributed Generation Laboratories, which consist of two main facilities: the Hybrid system/Microgrid test site and the PV systems laboratory. Each of the two facilities consists of the following laboratories:

Experimental Microgrid: The Hybrid Power Plant and Microgrid laboratory is designed for studies on the performance of stand‐alone and interconnected microgrids, but it can also serve as an emulator of autonomous weak grids, such as the power systems of islands. The microgrid’s backbone is a low voltage, 3‐phase network to which all DER components are connected. The interconnection of the cables allows, among others, the ad hoc introduction of lumped parameters such as resistors and inductances which emulate the characteristics of distribution lines. The system is designed with a capability of hosting devices up to 20kW. The communication and control of the system is primarily obtained via Interbus. Apart from that, the microgrid incorporates some extra acquisition and supervisory control components, such as a power quality meter for monitoring active/reactive power, voltage and frequency at the mains. The communication of this meter with the central control console is obtained via Modbus protocol. Furthermore, there is one set of battery inverters which makes use of proprietary RS485 protocol for data and commands exchange. The visualisation of supervision, monitoring and control of the microgrid is obtained by an application built in LabVIEW. This application is interoperable and by means of the OPC DA protocol it allows the interconnection with other high-level applications such as Matlab/Simulink. This feature allows the flexible integration of control algorithms and real-time simulation models into the actual microgrid. The test site is appropriate for connecting DER units to evaluate their performance in a microgrid environment, but control components such as load controllers, energy management systems and distributed generation unit controllers can also be applied in order to implement demand side and energy management optimisation. Storage components are also available for use, i.e. three electrochemical units (batteries).. The system is divided into three major layers: the power components, the control system and the communication interface.

The power components of the microgrid include two PV panels (PV1 at 1.1 and PV2 at 4.4 kWp capacity) both of which are interconnected via single-phase PV inverters (1.1 and 2.5kWp respectively). It is worth noting that PV2 is mounted on a single-axis tracking system. In addition to the PVs the microgrid is equipped with three battery banks, 420Ah/48V, 420Ah/48V and 690Ah/60V respectively. The technology used in these banks  is lead-acid (OPzS) batteries. The energy conversion for the batteries is obtained via two setups of three single phase inverters each, which can be used in combination with any battery as a 3-phase system or as three separate single-phase systems. One setup of battery inverters is capable of providing P/f and Q/V droop control while operating in grid-connected or islanded mode. In the latter case, which regards the operation of islanded power systems, a 3-phase diesel generator 400 Vac, 50 Hz, 12.5 kVA can be deployed for the electrification of the microgrid with extra power. Alternatively, the microgrid is mainly operated in interconnection to the LV distribution grid.

The main consumers of the microgrid are a 13 kW resistor load bank, and one capacitive load (2.5kVAr).

The main communication and control layer of the microgrid is based on Interbus which is equiped with distributed analog and digital I/O modules. The latter modules communicate via RS485, thus transferring data to the interface console and control signals to all controllable devices. All signals are acquired by a central PC which hosts the Interbus controller and an interface application developed in LabVIEW that provides the following capabilities:

PV Systems Laboratory: It is divided into three laboratories each specialised in one type of components of a PV system, namely PV Testing Lab,  Power Electronics Lab and Battery Testing Lab.

The PV Testing laboratory is equipped with the following main hardware, intended for the characterisation of PV cells, modules or arrays:

The battery testing laboratory focuses on the characterisation of batteries operating under specified conditions referring to battery testing according to international standards (such as capacity or endurance tests) and the development of guidelines for the improvement of battery usage depending on the application. The main hardware of the lab is:

The services that the DG-Lab can provide with regard to all the above mentioned facilities are listed below:

CRES was founded in September 1987 by Presidential Decree 375/87. It is a public entity, supervised by the Ministry of Environment and Energy and has financial and administrative independence. CRES’ funding is mainly provided by National, European and International projects, as well as projects carried out on behalf of the industrial, hotel, and construction sector, etc. Its main goal is the research and promotion of RES/RUE/ES applications at a national and international level, as well as the support of related activities, taking into consideration the principles of sustainable development. The Centre is managed by a seven-member Administrative Council, which includes representatives from the General Secretariat of Research and Technology (Ministry of Education and Religious Affairs, Culture and Sports), the Public Power Corporation and the Hellenic Federation of Enterprises. CRES has a scientific staff of more than 120 highly qualified and experienced multidisciplinary scientists and engineers. Its organisational structure comprises of the following units:

Since 1992, CRES is located on its wholly owned premises in Pikermi, Attica, where in addition to over 2000 square meters of main office space, it has experimental outdoor installations, specialised laboratories for energy technologies, a mechanical shop, conference rooms, a library and maintains a strong computing infrastructure. CRES has installed a demonstration Wind Park in the area of Agia Marina in Lavrio, Attica. The Wind Park is connected to the distribution network and has an installed capacity of 3MW. In the facility of the Wind Park, CRES operates the Park of ENergy Awareness (PENA), a new demonstration site for Renewable Energy Sources. In PENA everyone has the opportunity to observe real small scale RES plants in operation, while the young visitors can learn about environmental friendly technologies through innovative educational tools.

The PVs and Distributed Generation Department of CRES is part of the Renewable Energy Sources Division (RESD). RESD employs 40 scientists and engineers, focusing its activities on the design, support and execution of European and national RTD programs for the development of economically viable and environmentally friendly RES/RUE/ES technologies. The PVs and DG Department cooperates systematically with organisations for the promotion of PV technology and Distributed Generation, such as EPIA and actively participates in European initiatives, e.g. the Electricity Networks of the Future (Smart Grids) and the European Technology Platforms for Photovoltaics (PV–TRAC) etc.

Season’s greetings from the @ERIGrid project 🍾🍾🍾

Many thanks for your interest in our activities and the great cooperation!

Emergency response is critical to battery #energystorage system safety. Read today's post to learn about the importance of having an emergency response plan to provide guidance on how to proceed safely and effectively in the case of a fire. https://www.dnv.com/article/tune-up-your-energy-storage-emergency-response-planning-213640 #batterysafety