RSE – Ricerca sul Sistema Energetico SpA carries out research in the energy field, with special focus on national strategic projects funded through the Fund for Research into Electrical Systems. The activities cover the entire supply system with an application-oriented, experimental and system-based approach. RSE conducts research in three main areas: the sustainable development of the Italian electrical power network and related infrastructures, the safe and effective use of primary sources of energy, as well as power generation, transport and distribution, and end-use energy efficiency.

The Facility extends over an area of about 20000 m2, is interconnected to the MV Grid by means of a 800 kVA dedicated transformer (23 kV/400 V) and has an overall capacity of 350 kW (active power) and 300 kVAr (reactive power). RSE’s microgrid is able to operate grid connected or in islanded mode thanks to a synchronous generator and/or grid forming converters. All island operation (transition, long period island control, synchronization and reconnection) can be managed. 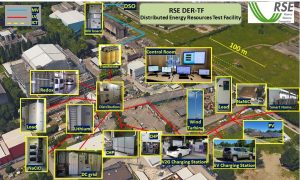 Different types of DER generators, as PV Fields (46 kWp), Small Wind Generator (3 kWp) and natural gas ICE CHPs (50 kWe/80 kWth and 5 kWe/14 kWth) are connected. The facility has an overall storage capability of about 230 kWh based on different storage technologies as Lithium, Flow (Redox) and High temperature Nickel-Sodium batteries connected to the grid with dedicated converters. A centralized resistive, inductive and capacitive load (with a overall capability of about 93 kW, 69 kVAr inductive and 150 kVAr capacitive) is connected to the grid in order to simulate different typologies of user loads. Furthermore a small pure-resistive load (6 kW) and an electronic load (12 kW with harmonic generation) are installed in the Test Facility. Several EV charging stations with different power capacity are also connected to RSE microgrid. Among them two Vehicle-to-Grid charging stations (15 kW each one) allow bidirectional power exchanges.

In addition, a Low Voltage DC Microgrid, capable to operate in islanded mode or interconnected to the AC grid is installed in the same area. The DC microgrid operates at nominal voltage of 380 Vdc and is composed of a bidirectional interface converter (100 kVA), two High temperature Nickel-Sodium batteries (each 30kW, 16kWh), two supercapacitors banks (each 30 kW, 8 seconds), a PV emulator (20kW), a DC fully controllable resistive load (30kW) connected to DC bus through DC/DC converter and a DC programmable load (30kW) directly connected to DC grid. All the power converters are interfaced through dSpace controllers allowing new control design. At last, a second AC/DC converter (30 kVA) allows the meshing of the AC grid and the power exchange between two different feeders. A secondary AC grid (operating also at different voltage and frequency levels) can be fed by DC Microgrid in order to test DER behaviour at various V/f levels (i.e. to test frequency and voltage controls).

Among the existing power converters three of them (bidirectional 2 x 30 kVA and 1 x 20 kVA) can be configured to operate as grid feeding, grid forming or grid supporting converters. This capability allows to operate the DER-TF in parallel to the main grid or in islanded mode, resorting to a Master-Slave or a distributed configuration. Finally in Grid Supporting mode it is also possible to set the Virtual Impedance and the droop coefficients.

The microgrid layout is configurable (locally or remotely) in order to operate with different grid topologies, both radial and meshed. There’s also the opportunity to extend feeders length till one kilometre. Most of the grid nodes, lines and all the DERs are provided with electrical measure equipment (Power Quality Analyser and PMU), set up to collect and analyse the experimental data derived from the field test.

A Supervision and Control system has been developed in house in order to monitor and control all installed resources, integrating also weather and PV generation forecasts provided by our own forecasting models. Different Energy Management and control functions have been implemented and can be used in order to fulfil with the desired objective (economic optimization, renewable resources balancing, self-consumption, voltage control, state estimator). Resources can be controlled manually or in a full automated mode according to the  different Microgrid control functions. New Management and control functions (also from third parties and adopting different platform as Matlab) can be easily integrated to DER Test Facility Control System. All the measurements and signals managed by the SCADA are recorded in a database that can be accessed through a dedicated user interface.

Communication has been developed with different technologies, but LAN Ethernet is mainly adopted. DER-TF SCADA is written in LabVIEW and can be interfaced with any other software for both measurements acquisition and device control. The currently available protocols for data access are the following: (i) NI LabVIEW DataSocket protocol, (ii) OPC DA protocol, (iii) MODBUS TCP protocol, (iv) JaNDER Level 0 (based on REDIS), (v) JaNDER Level 1 (based on IEC 61850), and (vi) JaNDER Level 2 (based on CIM).

RSE DER Test Facility allows to test the integration, interconnection and performances of different technologies and control strategies for microgrid. In particular the DER-TF provides the following services (but not limited to):

RSE (Ricerca sul Sistema Energetico) SpA (www.rse-web.it) is a Non-profit Research Organization established to take over funded research activities of national and international. About 350 technicians and researchers – with the support of their major laboratories – carry out strategic research in the electricity and energy sector, with strong emphasis on experimental applications. The RSE mission is to perform public interest R&D programs to address the national energy, environmental and economic goals, with an open view to the EU research initiatives. RSE SpA is currently 100% owned by GSE, “Gestore Servizi Energetici” SpA, a public company entirely owned by the Italian Government. On the basis of three-year Implementing Agreements for the research activities on the electric

RSE is recognised in Europe as a Non-profit Research Organisation with a wide and successful role in integrating the national research programmes with the EU directives and plans: it has been cooperating in more than 75 international research projects (of which more than 20 currently still running) in the energy field. RSE is involved in several national and international standardization committees on Distributed Generation integration. RSE is also actively involved in supporting the Italian Ministry of Economic Development with the aim of implementing the EU Strategic Energy Technology Plan (SET Plan): namely the Joint Programme of the European Energy Research Alliance (EERA) on Smart Grids (as JP Leader) and Energy Storage, as well as the European Technology and Innovation Platform Smart Networks for Energy Transition (ETIP – SNET). Moreover, RSE represents Italy at the International Energy Agency (IEA) for five Implementing Agreements/TCPs, holds the vice-chairman-ship of the ISGAN TCP (International Smart Grid Action Network) and within Mission Innovation (MI) is co-leader of Challenge # 1 – Smart Grids.

DER-TF (managed and operated by the Power Generation Technologies and Materials Department) is an infrastructure available for all RSE researchers in order to develop and test Smart Grid and Microgrid concepts including management and control optimization, advanced power system architectures, DER and storages integration, electric mobility. In addition RSE DER-TF is used by several industries (in the aim of cooperation agreements) in order to develop and test with RSE new components and smart grid management and control functions.

All the offered experimental systems included in the RSE DER-TF are in the same area in Milan, Italy.

For safety reasons the users are not allowed to operate the systems by themselves; even when safety instructions will be provided, tests will be carried out by staff of RSE. For the rest of applications and after ad-hoc training, the user group will have access to the infrastructure for the duration of the stay with the support of RSE’s researchers and laboratory technicians. The scheduling of the experiments will be agreed and booked prior to the stay according to the availability of the involved staff and equipment. Administrative documentation for the access (contract, non-disclosure agreement, etc.) will comply with ERIGrid 2.0 common indications.

In addition to the general corporate services (Internet connection, canteen, etc.) and the support and advice on accommodation and transportation to RSE’s infrastructure, the access being offered includes supervision and help of RSE’s staff:

In principle, a typical stay of 2-4 weeks is foreseen for a single user group, but this period could be modified depending on the concrete user project. The user group (usually 2-3 persons) can use the infrastructure for the defined time.

RSE will refund the stay expenses when the stay is finished (or on agreed periods): the user must declare the incurred expenses and present the requested invoices/receipts to RSE in order to get the refund.

Logical expenses must be made by the user (with a preliminary authorization by RSE): travels will be made in economy class.

Season’s greetings from the @ERIGrid project 🍾🍾🍾

Many thanks for your interest in our activities and the great cooperation!

Emergency response is critical to battery #energystorage system safety. Read today's post to learn about the importance of having an emergency response plan to provide guidance on how to proceed safely and effectively in the case of a fire. https://www.dnv.com/article/tune-up-your-energy-storage-emergency-response-planning-213640 #batterysafety