Among the DTU’s facilities, the ERIGrid 2.0 lab access program includes SYSLAB, a flexible intelligent energy and distribution network laboratory, and the Energy Systems Simulation lab (ESSL).  The facilities are in separate locations, but can also be virtually interconnected for distributed hardware-in-the-loop experiments. 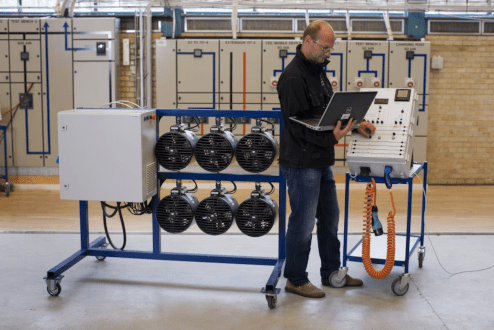 SYSLAB is an experimental facility at DTU Risø campus, designed as a testbed for advanced control and communication concepts for power grids and sector coupling. The facility has been enlarged several times since its inception in 2005; the current setup extends across multiple sites on Risø campus within an area of about one square kilometer.

A 400V, 3-phase grid with a total of 16 busbars and 116 automated coupling points serves as the electrical backbone of the facility and allows a large variety of different grid topologies to be set up by means of a central crossbar matrix. When all cables are in use, a maximum feeder length of up to 3km can be achieved. The laboratory grid can be connected to the campus distribution grid through one of several interconnection points, it can be operated in island mode or be split up into multiple independent subgrids.

The  back-to-back converter allows controlled power exchange between SYSLAB and the campus grid and can be used for equipment simulation or PHIL tests.

The SYSLAB residential buildings are equipped with a multitude of sensors, including room temperature, light intensity, presence/motion, window and door contacts. Each building has a variety of controllable energy consumers – appliances, space heating and cooling and hot tap water. A custom-made building automation platform allows the deployment of building controllers written in Java or Python which are able to interact with the building as well as process remote-control signals from SYSLAB, e.g. for demand response applications.

The infrastructure has been specifically designed for testing distributed control architectures and features a high degree of automation, with almost the entire laboratory being remote controllable via an API. Each unit is supervised locally by a dedicated computing node which acts as a communication gateway. The node computers run a custom, Java-based software platform on top of a standard Linux installation which provides communication between nodes, facilitates the deployment of local controllers and logs unit data. The nodes are almost identical, and the layout of the communication network does not put any of them at the center of the network. This results in great flexibility with respect to control architectures; traditional master-slave control concepts can be implemented, but also more advanced approaches such as controllers based on peer-to-peer communication or multi-layered hybrid control systems can be tested.

Various software interfaces exist for the interaction with the laboratory infrastructure; besides the native Java API many SCADA functions can be accessed through Web services, XMLRPC and wrappers for Matlab or Python.

The Flexhouses are three highly automated buildings which are integrated into SYSLAB. Flexhouse I is a former office pavilion, while Flexhouses II and III were originally built as single-family homes before being retrofitted for research use. Their primary purpose is to facilitate research on the integration of buildings into the control of energy systems. Flexhouse I is electrically heated and cooled, with individual electrical radiators and split air conditioning systems in each room. The other two buildings have water-borne central heating systems which are fed from the SYSLAB district heating switchboard. Flexhouses I and III feature extensive measurement instrumentation at the building level as well as on a per-room basis.

The Real Time Digital System Simulator (RTDS) of the Energy System Simulation Lab can be made available e.g. for power system simulations for use in hardware-in-the-loop-test(HIL) or wide area monitoring and control systems (WAMS). The RTDS consist of ten racks with general processing cards (PB5/GPC), a number of GTAI/GTAO digital input and output cards, and some GTNET/GTNETx2 data communication cards. The data communication cards come with DNP3, IEC-104, and PMU protocol software.

The HPC with more than 900 cores is integrated with a software setup with a private data workspace for securing that project data  is only accessible for a project team. The solution complies with GDPR regulations. The software integration of HPC, RTDS and data analytics platforms is part of an ongoing extension project called “Digital Energy Lab” and will be fully implemented by June 2021.

SYSLAB enables research and testing of control concepts and control strategies for energy systems with distributed control, integrating a number of decentralized production and consumption components in a systems context on a

In 2018, SYSLAB was used to conduct experiments by 8 PhD and 6 Msc/BSc students, some as part of the 6 national and international projects which used SYSLAB as part of their research. During the ERIGrid project SYSLAB hosted 7 user projects on distribution voltage control, demand response and multi-energy systems.

The Control Center and Energy System Simulation Lab (ESSL) is a laboratory for research, development and test of new advanced principles for supervision and control of smart grids using real-time simulation. The ESSL and Control Center lab has been part of several national and international projects, example on developing real-time security assessments and control based on PMU information. A suite of tools will be established across the RTDS, HPC and EnergyData subsystems to support a seamless user experience and lowering the technical barriers of using the platform. This software integration via “Digital Energy Lab” will be fully available by June 2021.

User projects will be supported by the procedures, methods and tools developed in H2020 ERIGrid and ERIGrid 2.0. This infrastructure was already accessible in the context of the EU projects DERri (FP7) and ERIGrid (H2020).

SYSLAB has been used in the past for a variety of applications, including:

Potential applications of the ESSL include:

SYSLAB, a flexible intelligent energy and distribution network laboratory, and the Energy Systems Simulation lab (ESSL). PowerLabDK, a federation of test facilities associated with the Department of Electrical Engineering of the Technical University of Denmark (DTU), is a flexible intelligent DER laboratory. The Center for Electric Power and Energy (CEE) is a center for research, innovation and education at the Technical University of Denmark (DTU), department of Electrical Engineering. CEE covers a broad range of electric technologies including production, transmission, distribution and consumption of electricity as well the interactions with other energy carrier systems such as district heating. CEE aims at enabling a more intelligent, flexible and automated electric power system that can accommodate the future expansion of renewable energy production and the long term vision of a fossil-free society. CEE holds competences within electric components, electric power systems, automation of complex power systems, electricity markets, end-user interaction and intelligent energy systems.

The Energy Systems Management (ESM) group is a research group within CEE and performs research covering the development and analysis of new solutions for the management and operation of future distributed power systems with a high share of renewable energy and distributed energy resources. The investigation of future system architectures, centralized as well as decentralized, is part of the research area, with the goal to provide optimal and seamless interaction of all system elements and subsystems. This includes e.g. agent-based and distributed control solutions, aggregation technologies, electric distribution network and sector coupling. The solutions cover novel ICT implementations combined with innovative market-based designs and new grid management methods. An important aspect is interoperability of communication and services. ESM research efforts also cover innovative monitoring, operation and control which enable for example management of grid bottleneck, islanding solutions and microgrids. The research has important interfaces with many of the other groups including research within markets and energy resources, services and control.

PowerLabDK administers electric power and energy laboratories on behalf of CEE. PowerLabDK supports the development, test, training and demonstration of technologies that will contribute to the development of a reliable, cost efficient and sustainable energy systems based on renewable energy sources. PowerLabDK is a national GreenLab under the Danish Energy Agency.

The facilities include flexible test laboratories, large-scale experimental facilities and a complete full-scale power distribution system on the Island of Bornholm which serves as a data source and a platform for full-scale and real-life experiments. The PowerLabDK facilities welcome engineers and researchers from industry and academia as well as innovative students.

The experimental systems offered by DTU are in two locations around Copenhagen, Denmark: SYSLAB on DTU’s Risø campus near Roskilde,  and ESSL on DTU’s main campus in Kongens Lyngby. Both sites are accessible by public transit. Remote lab access and coupling of both infrastructures may be possible but needs to be discussed with the hosting organization.

For most applications, with safety instructions, access to remote software interfaces and ad-hoc training provided, it is possible for the user group to carry out control experiments in SYSLAB directly, with full access to the related facilities for the duration of the stay (with the support of DTU’s researchers and laboratory technicians when necessary). For safety reasons, the users are not expected to set up the systems configurations by themselves and DTU staff will be present to support, set up and dismantle the experimental setups, as well as to support critical applications. The configuration and scheduling of the experiments will be agreed and booked prior to the stay according to the availability of the involved staff and equipment. Administrative documentation for the access (contract, non-disclosure agreement, etc.) will comply with ERIGrid 2.0 common indications.

In addition to the general corporate services (Internet connection, canteen, etc.) and the support and advice on accommodation and transportation to DTU’s infrastructure, the access being offered includes supervision and help of DTU’s staff:

As a complement to the pre-access contacts between the user group and DTU, the stay will start with an introductory meeting with a senior researcher for confirming the stay conditions (confidentiality, safety indications), scheduling the activities, explaining the on-site procedures, clarifying the logistics and technical details.

In principle, a typical stay of 2-4 weeks is foreseen for a single user group; in some circumstances it can be advised to split this period into two visits or be extended depending on the concrete user project. The user group (usually 2-3 persons) can use the infrastructure for the defined time.

User expenses for the lab access are paid by ERIGrid (EU H2020 Programme). This includes travels to DTU’s facilities by plane, accommodation, daily subsistence, and daily transportation during the stay.

For the user projects taking place in DTU will refund the stay expenses when the stay is finished (or on agreed periods): the user must declare the incurred expenses and present the invoices/receipts to DTU in order to get the refund.

Logical expenses must be made by the user: travels will be made in economy class and conventional hotels (not luxury) or equivalent accommodation will be used.

Join now our webinar on Transnational and Virtual Access: https://bit.ly/3E2P9i3

More about our Virtual Access and the available virtual services: https://erigrid2.eu/lab-access/#virtual

Live from our Webinar on "Transnational and Virtual Access".